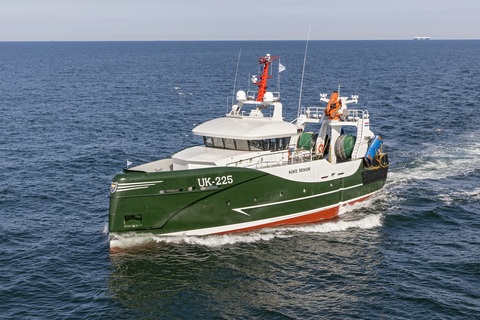 As the MDV 1, the UK 225 Auke-Senior has also chosen the revolutionary design that emerged from the principles of the Masterplan Sustainable Fisheries foundation. The design ensures that fishing is done as efficiently as possible thanks to the unique hull shape and the hybrid drive. Overall, these fuel-saving initiatives deliver an 80% reduction in fuel consumption compared to traditional fishing vessels.

The underwater hull has remained identical to the MDV 1, but a number of minor changes have been made above the water surface. The head of the ship has been raised slightly so that less water comes on board. In addition, the UK 225 has opted for fencing next to the wheelhouse instead of a high bulwark next to the wheelhouse that provides better visibility around the ship from the wheelhouse. For better stability, it was decided to install a pendulum tank.

The UK 225 follows the main principles of the MDV 1 but is a substantially different ship. The layout of the UK 225 has been adjusted, instead of one engine room, it has now been split into an engine room and propulsion room. As a result, the fish hold has been moved to the central ship instead of the foreship, so that unloading can be done with the crane on the stern and the crane on the foreship is no longer necessary. The fish hold has become larger compared to the narrow foreship due to the placement in the fuller central nave. In addition, the separate engine room and propulsion space has a favorable effect on the trim of the ship.

Article about the Auke Senior.

If you are interested in one of these ships or if you have your own ideas or plans, we invite you to contact Hoekman Shipbuilding.